These are more cards from the Christmas tutorial that I,m part of.
I used Outdoor Denim cardstock. The background is white daisy pigment ink over Simon Says Stamp Falling Snow Stencil. The snowbanks are made with the same ink with the Simon Says Christmas Scene stencil. I moved the stencil in different positions to get the look I wanted.
I embossed the sentiment with ranger superfine ink and its from the D1656 Miracle of Christmas stamp set. The bear is from the same set.
I used the Shinhan markers to color it. I used Carmine, Mahogany, turquoise blue. I used 3D foam tape to pop the bear up. 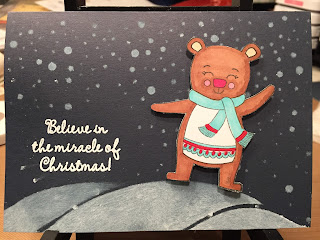 This one is made the same way but I used Seasons Greetings  stamp set for the penguin. I fussy cut it and used the carmine marker for the scarf. 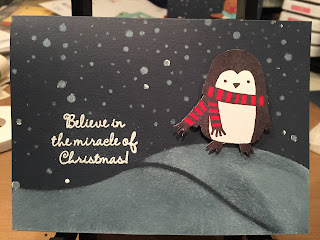 123 flames
Welcome! Well I've been doing this for almost 2 years. I still have some learning to do but I'm working on it. I have been married for 32 years.I have 2 wonderful boys. The oldest got married to a beautiful girl last April and I am now a Nana to a beautiful little boy! I'm so excited. I volunteered at the local YMCA with preschool children until last fall, which has been my job of choice for about 40 years, but now I am trying to see if I can turn this into a business. Wish me luck. I have been a consultant with Close to My Heart for 2 1/2 years. I have been doing some sort of crafting forever. Paper, wood, cloth, eggs, etc. I hope that i can share a little inspiration and some of my trials as well.